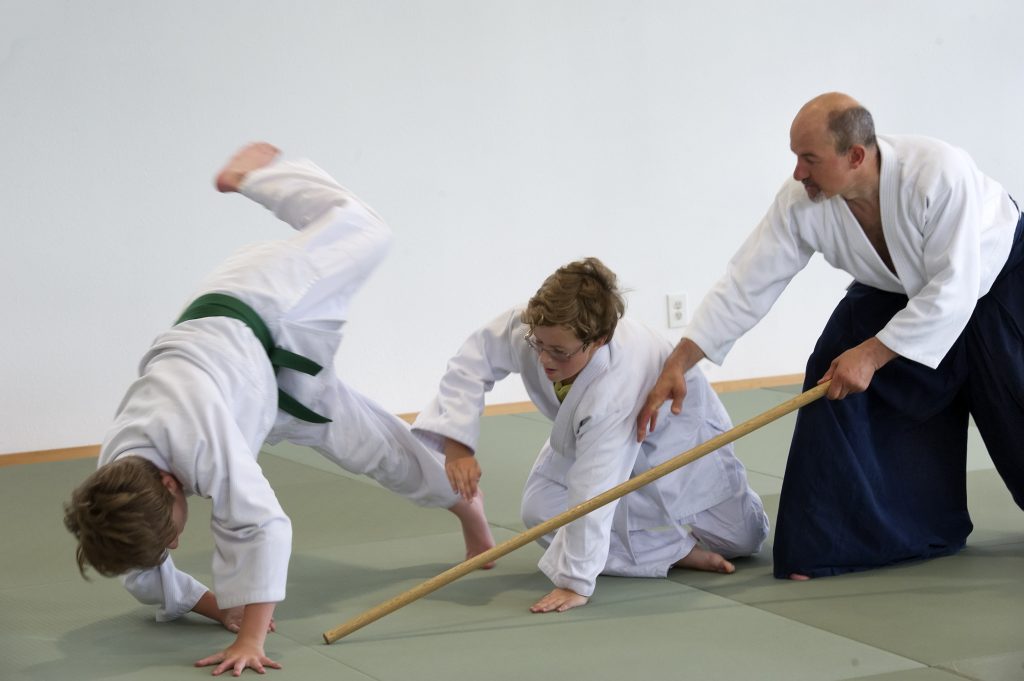 New age spirituality has never really resonated with me. However, I have to confess to a strong belief in universal energy and the power of the universe to deliver what you need, when you need it, as long as you have the capacity to see its providence. I feel the strong connection between this universal system of delivery and my relationship to Aikido.

One of these moments of (what I perceive to be) universal providence occurred for me in 2016-17, while serving in my current role as an executive at the University of Washington Tacoma. I was invited to the experience of participating in class XXIII of the American Leadership Forum (ALF). ALF provides its participants with an environment where we have meaningful personal experiences within the context of building individual capacity in partnering across difference. These experiences and explorations can be challenging and require the individual tools to find center and balance when emotions are running high. Amongst many, there are two very resonant tools introduced to each class for understanding our emotions and needs as well as finding balance during moments of conflict. One is a system of conflict resolution, developed by Dr. Marshall Rosenberg called Non Violent Communication (NVC). The other is a day of introduction to Aikido and its principles of blending, harmony and “stepping offline” as metaphors for managing conflict. A new sense of curiosity in Aikido and NVC, as pathways to finding balance and center through mindfulness and being aware, present and “in the moment,” was alive in me.

Although I could continue my reading and practice of NVC, it wasn’t clear where I could access Aikido training. I knew there were dojos in Seattle and the Kitsap Peninsula, but schedules were tight and the commutes too far. Late in 2017, I was surprised and excited to hear that Aikido classes were being taught by Tacoma Aikikai out of one of the studios in Urban Grace Church. I felt like I had been delivered a gift and didn’t hesitate to sign up for classes a couple times per week.

As a bit of history, in my early twenties, having just graduated from college and headed to New York to pursue a life in the theatre, my movement instructor at the time encouraged me to engage in some master practice to continue to develop my facility with movement and body control. On his recommendation, while living in the Bronx, I identified a Nihon Goshin Aikido dojo about an hour north in Ossining, New York. I spent a year training in the dojo during my few years in New York. My theatre career lead to a move back to Arizona and the start of a new career in Higher Education. Un-surprisingly, over the next two decades my professional life was accompanied by the joy of marriage, the miracle of children, big moves, new friends and hobbies, but no Aikido.

Upon joining Tacoma Aikikai, even after a twenty year break in training, I could still feel the whispers of Aikido in my body, but a lot had changed. I was fifty pounds heavier, my big toes arthritic with a stiffening condition, and my body suffering from chronic illness. When I stepped barefoot on the tatami for the first time, after so long, I was filled with excitement and trepidation, and both were warranted. I was open with Murphy Sensei about my condition and limitations. She was supportive of my persistence but never failed to challenge me. She introduced me to parts of my core that I hadn’t previously realized existed. I felt pain that made me think I couldn’t go on, but strangely, reassured me that I was improving my health and condition. Sensei would ask me about the nature of my pain and reassure me that my body was “reorganizing” itself around the demands of the practice. Although following authority hasn’t always necessarily been my inclination, I trusted her and the well of wisdom she drew from. As O-sensei said, “The purpose of training is to tighten up the slack, toughen the body, and polish the spirit.” These assertions translated directly into my lived experience. In that first year, I lost 40 pounds, progressed in kyu, and tamped down the chronic issues I had been dealing with for so long. I found breathing and centering, stretching and movement to be medicine I most needed.

It’s one thing to lose a few pounds or gain some stamina. Just as important, I need to recognize the impact of Aikido on my spirit and relationship to others. My recent experiences with ALF and Aikido have been during a period of turmoil for our country, our communities, our stems from conflict opens the door to our shared progress.

For nearly a year now our usual training schedules and rigors have been disrupted. In my news feed, the world appears in disarray, while on the same monitor I engage in endless, end-to-end meetings with colleagues, whom I may never experience the same way again. I was paralyzed by the fear of losing Aikido as an anchor for my physical and mental well-being. I shared the same feelings of grief and loss, along with 6 Billion other human beings, as our collective lives were disrupted, isolated, threatened or put on hold. Yet, as we see some light at the end of the pandemic tunnel, I can’t help reflect on some of the beauty and grace of our Aikido community in persevering and training, on the power of solo training, on my gratitude to Eric and Ea kids and families. Most of us have never witnessed before the current climate and widespread inability to navigate and progress beyond difference with others. As a condition of being human, difference can polarize us, or it can energize us by leveraging our diversity of experience and perspectives. In order to harness the power of difference we have to be facile with the natural conflict that can arise out of that difference. As NVC is the manifestation of a psychology and system of communication that can help to navigate potentially volatile difference, Aikido is the physical metaphor and manifestation of tethering into the energy that arises out of difference. O’Sensei believed Aikido to be the path to reconciliation for mankind, a way to harmonize all mankind into one family. Although the statement seems lofty, I believe when the body realizes the power of stepping offline and not addressing conflict with opposition, this facility for harnessing the energy that Sensei for their creativity: training in parks, in the cold and rain, in masks, with pool noodles or nothing or no one at all. I am grateful for the Bokken and Jyo. Were it not for social distancing, I would never have embraced training with weapons in the way I have, and, now always will. In spite of the absence of physical contact, pandemic training has deepened my sense of connection to Aikido. When the reality of pandemic set in, Murphy Sensei told us, “this is your training.” She was right.

As I have weathered the onslaught of the last year, seen my children mourn the vacuum of tween social experience and endure the mind-numbing side effects of online learning, as my wife and I feared for our parents and had to distance from friends, as I watched our country burn and democracy come under assault, I still reached for training to sharpen my vision and balance my heart. I still reach for the hope that is Aiki.

by Allison Muir January 2022 “All the principles of heaven and earth are living inside you. Life itself is truth, and this will never change. Everything in heaven and earth breathes. Breath is the thread that ties creation together.” - Morihei Ueshiba Darker, colder...
Read More

The Art of the Pool Noodle: Lessons is Flexibility

by Kristen Lawson Photo (c) 2020 K.D. Lawson I walk. I most enjoy walking in nature, natural surroundings, or as close to that as I can get. Light, smells, and sounds change day-to-day and season-to-season. Right now, I am looking forward to the sounds of the song...
Read More

How long have you been a member of the dojo, and how long have you been training in Aikido? Claire: This dojo is my beginning with Aikido, and I came to it in September of 2019 for the fall Beginner Series. That was my first ever exposure to Aikido. I’ve been mostly...
Read More

Why did you first become interested in Aikido and how long have you been training at Tacoma Aikikai? Rose: I think I first heard of Aikido from The Walking Dead TV show, and I liked the idea of being strong and skilled but causing no more harm than absolutely...
Read More

Aikido is Not a Place

by Malory Graham Chief instructor, Seattle Aikikai As the global Covid-19 pandemic continues into another year, we are watching dojos all over the world make the hard decision to close their physical spaces. We closed up our dojo in Seattle, WA in July after operating...
Read More

by Ea Murphy Plans change. One out of many of the things planned for 2020 was hosting Thierry Diagana Sensei and his family from California for a summer seminar at Tacoma Aikikai. When we finally did see the Diagana family over winter break, we were speechless when...
Read More

by Laura Livingston It was the summer months that lured me into waking up at 5:00 am. The traffic outside the window of my old apartment was limited. The silence combined with the intense commitment of the daylight coming forward, creating and altering shadows, seemed...
Read More

by Charlie Emlet Most of us, if we have practiced a martial art long enough, have faced times when we could not train as normal. Maybe a training related injury or work/family obligations thwarted our training routine. These situations usually last days or perhawps...
Read More
← previous post next post →